Publishers Weekly, the "bible of the book business," has reviewed my debut novel, The Wolf at the End of the World. Here are the highlights:

"Smith (Chimerascope) has a thorough grounding in Native American lore, and this creates an immersive and enjoyable reading experience. Readers will delight in learning more about Native American mythology, which is skillfully woven throughout the story. Smith's novel is both well paced and deftly plotted—leaving readers curious about what comes next for the Heroka in the modern world."

You can read the whole review here and find out more about The Wolf at the End of the World here.

Keep it in the mail 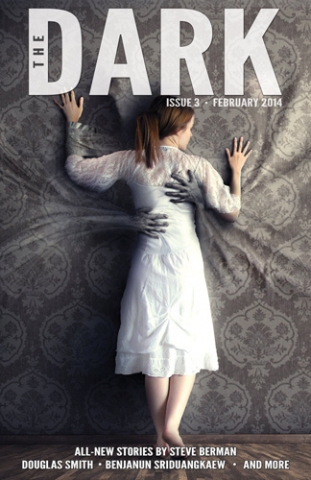 In 2013, I wrote a 32-part (still surprised I had that much to say!) series for Amazing Stories on how to market and sell short fiction. One of my key pieces of advice in that series, which I dealt with in Part 15, was to keep your work in the mail. Don't worry about the story being rejected. Don't worry about the number of rejections it accumulates. Don't worry about how long the story has been circulating. As long as you can find a professional market to send that story to, keep sending it out.

Now in case you wonder if I always follow my own advice, I present for your amusement and edification a recent experience.

Back in November, I sold a story called "Dream Flight" to the new professional magazine The Dark, which is edited by Jack Fisher and Sean Wallace. My story will appear in issue #3 in February, and the very awesome cover is displayed at the right. Even better, I just received the table of contents and discovered that "Dream Flight" will be the lead story.

Excellent and wonderful. It's always a thrill to sell a story, and especially to appear in a new magazine. I've always loved this story, and knew that it would eventually find a home. But this sale brought a special thrill, since I'd written "Dream Flight," well, a while ago.

So how long did it take me to sell this tale?

I wrote earlier about a 3-part series that fellow writer, Zainab Amadahy, was writing for Muskrat Magazine about the lack of cultural diversity in the typical science fiction & fantasy convention. My prior post had links to the first two parts in the series. Zainab has now posted the third and final part in her series, in which she provides some excellent ideas for possibile panel topics that explore the issue of how to introduce greater diversity into not only SF&F conventions, but also the literature, the publishing industry, and our society and way of thinking. I hope that you'll check it out. I'm also hoping that maybe we can suggest some of these panels for an upcoming Toronto convention, such as the always excellent Ad Astra, in April 4-6, 2014.

Book trailer for THE WOLF

Check out this book trailer for my new novel, The Wolf at the End of the World, which Sam Kay of Kove Productions (Guy Gavriel Kay's son) was kind enough to produce for me.

I have no idea if book trailers actually work, as in getting anyone to want to read a book, the way that movie trailers can make you want to see the movie (or not see it). But Sam has done trailers for other authors, including his dad, so when he approached me, I definitely wanted to see what he would come up with.

I'm very happy with the result. Take a look at the trailer and tell me what you think.

You can check out other work by Kove Productions here.

I wrote recently on this blog about my cultural appropriation concerns when I was researching and writing my novel, The Wolf at the End of the World, which deals with and incorporates Anishinabe (specifically, Ojibwe) and Cree characters, stories, traditions, and issues, all around a theme of environment destruction and loss of animal habitat.

In November, I had the pleasure of meeting Zainab Amadahy, a fellow novelist and (among many other things) a writer for Muskrat Magazine, when she attended the launch for the book in Toronto.

A frequent discussion point around SF&F literature relates to its traditional domination by white writers of European ancestry (I could add "male" to that list, but that's not to the point of this post). Zainab is writing a three-part series for Muskrat, that she describes as follows:

What I’d like to offer in the next three segments are some suggestions to Science Fiction and Fantasy convention organizers everywhere who might be interested in growing and diversifying their events. Part one of this blog will outline the issue. Part two offers solutions and approaches. Part three will contain concrete suggestions for panel titles.

Part one of her series outlines her own experiences (some positive, but mostly not) stemming from the typical lack of ethnic diversity at SF conventions. Happily, she cites my book launch as one of the positive experiences.

In part two of the series, just posted today, Zainab explores ways of diversifying events and discusses why diversifying your con might be important.

I'm not sure I'm in full agreement with her point #5 in part 2. If you tell a con organizer that something needs to be fixed, you're generally going to be invited to join in trying to fix it. Cons are volunteer-run, fan-funded operations that can always use extra help. And being invited in is a good thing, since it implies interest in solving the problem--and fixing an organizational problem is generally easier from the inside.

But beyond that, I'm in strong agreement that much can be done to make SF&F cons more ethnically and culturally diverse and inviting.

I'll post the link to the third part in Zainab's series when it goes up. I hope you'll check out the posts and leave Zainab a comment. Feel free to leave a comment here as well.

My subscribers are special

Yes, they are. And because they are, they get treated specially. Like a free ebook for joining. Bigger discounts from my bookstore. Free giveaways of stories. Draws and contests. Exclusive writing content such as novel extracts. And much more.

Well, okay, not actually that much more. In fact, that's pretty well it. For now. But if I do think of other things I can do for my subscribers, beyond organ donation, I'll add it to the list.

I will never spam you and will only send information on my writing life, including new books and stories that are coming out, award news, events that I will be attending, etc.. You can unsubscribe at any time.

Just click on the link below, provide your name and email, and you're done. And as mentioned, as a thank you for signing up, I will send you a free short story ebook from my online store.

Thanks for your continued interest in my writing!

On writing about another culture 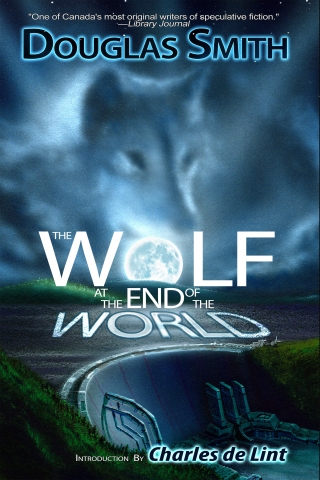 This will be a long post, but for me, it's an important one. I'm basing this post on the afterword that I include in my new novel, The Wolf at the End of the World. However, since a potential reader, especially a First Nations reader, may have concerns over the issue I address here (and therefore not read the book), I'm posting that afterword here.

My intent for writing this post is primarily to address a fear I had about writing The Wolf at the End of the World.  But before I can get into that, I need to first talk about the book's genesis.

Interview in the Markham Review

Aliza Libman Baronofsky interviews me in my local paper, the Markham Review, about my novel, THE WOLF AT THE END OF THE WORLD and moving from short fiction to novels.

Pictures from THE WOLF launch in Toronto

First, thanks to everyone who turned out at my launch for my new novel, The Wolf at the End of the World, at SFContario on November 30. Chris Szego of Bakka-Phoenix Books handled the book sales, and my good friend, George Hardy, was kind enough to not only show up but also to act as photographer for the event. (By the way, if anyone is interested in the services of a great photographer, you can contact George (George S K Hardy) at photos@gskh6.ca.)

Here are some of the photos. 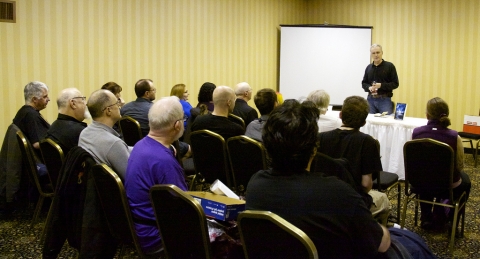 Book launch for THE WOLF this Saturday in Toronto

If you're in the Toronto area, please join me on Saturday November 30 for the Toronto launch of my new novel THE WOLF AT THE END OF THE WORLD. The launch will take place at the SFContario convention, but you do not need to be attending the convention to attend my launch.

Here are the details:

The nice people at Bakka-Phoenix Books will be there, and you'll be able to buy signed and personalized copies of the print edition, as well as the ebook edition in whatever format you like. Plus I'll have some free giveaways just for showing up. You can read more about THE WOLF here including an excerpt, as well as some early reviews.
I hope to see you there!