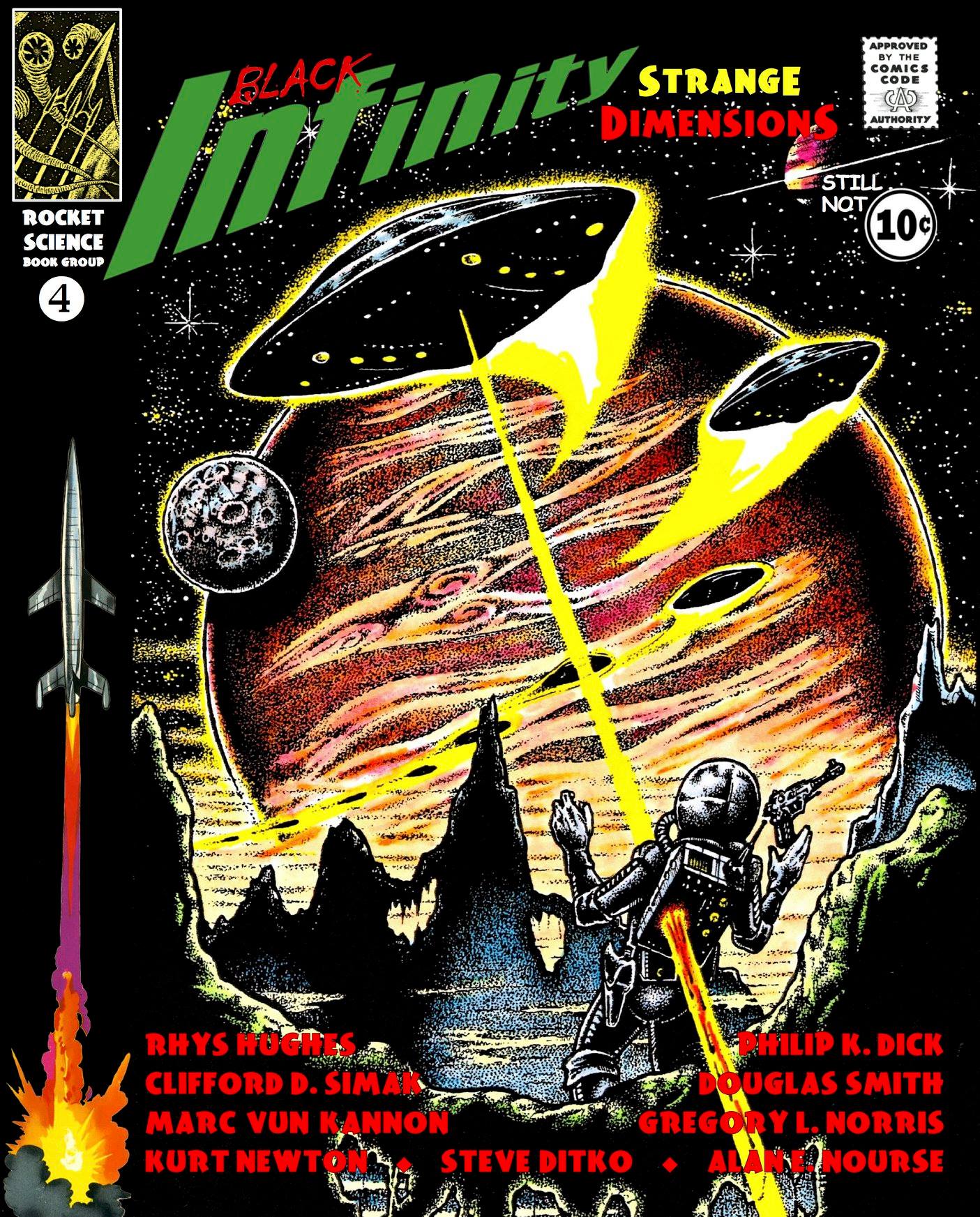 I'm thrilled to have my Aurora Award-winning story, "The Walker of the Shifting Borderland," appear in Black Infinity #4, now available with yet another fantastic retro cover (see right) plus "202 pages chock full of great stories by great writers, weird science, retro movie reviews, comics and so much more."

"The Walker of the Shifting Borderland" first appeared in the excellent Canadian speculative fiction magazine, On Spec, in 2012 and won the Aurora Award for Best Short Fiction the following year.

I've now had a story in each of the first four issues of Black Infinity. This time I get to share the cover with SF greats Philip K. Dick and Clifford D. Simak.

Together with the fiction, the issue also includes columns on retro movies by Matt Cowan, weird science by Todd Treichel, a classic comics story by Spider-Man co-creator Steve Ditko, and more.

I hope you'll check the issue out here and pick up a copy.

Dragons! "The Last of a Thing" reprinted in new dragon anthology 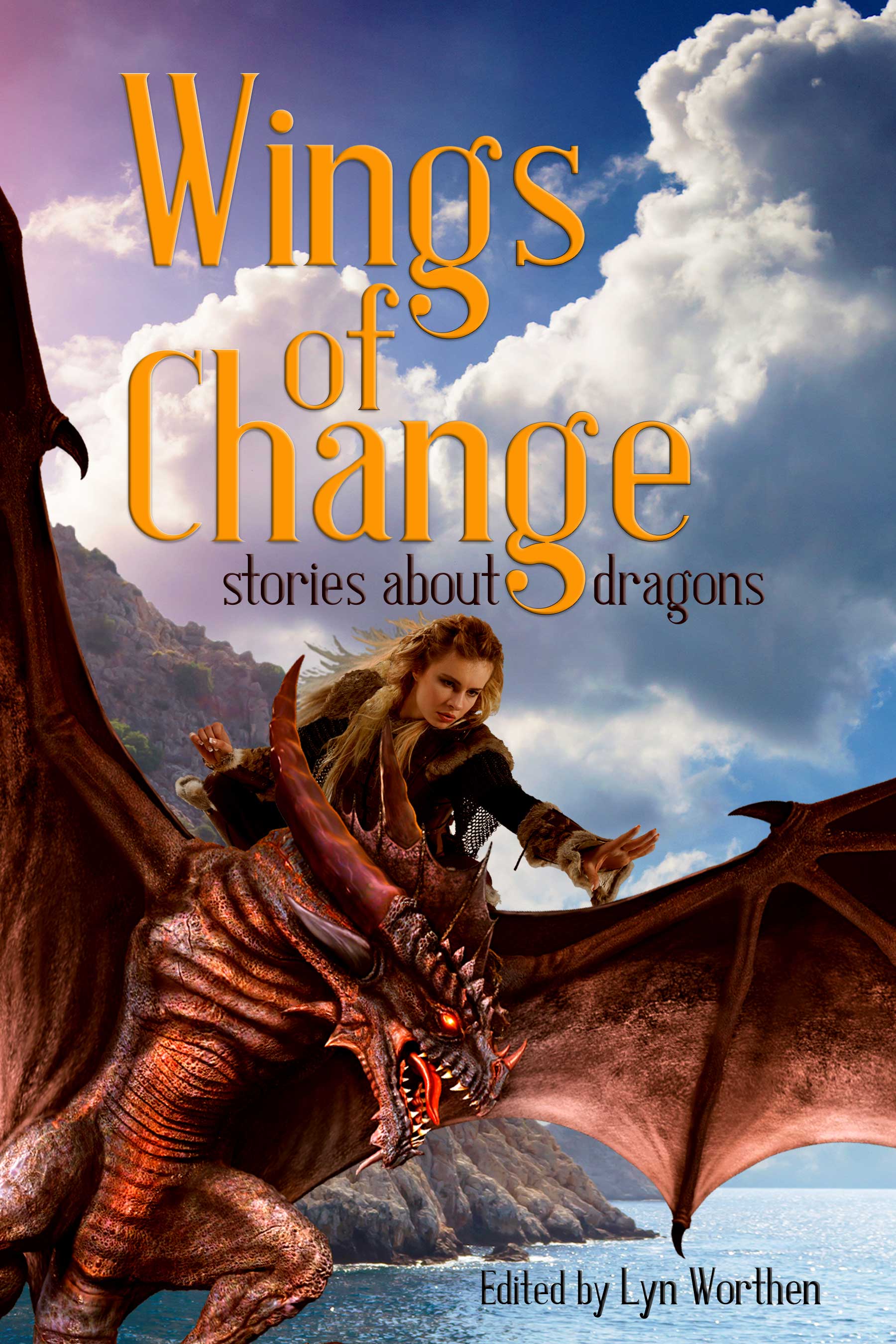 Wings of Change, a cool new dragon-themed anthology, out now from Camden Park Press, has reprinted my environmental dragon tale (no, really), "The Last of a Thing."

"The Last of a Thing" first appeared in the most excellent Canadian magazine, Pulp Literature, in 2016.

I must admit I was a little concerned when I sold the story to Pulp Literature. Most writers, if they've been doing this long enough, have a "market killer" story, a tale that keeps selling but never gets published because the acquiring magazine or anthology dies before they publish your story.

"The Last of a Thing" was my market-killer. I'd sold the story at least three times in the past but... yeah, well, you get it.

But Pulp Literature continues to publish beautiful issues filled with excellent fiction, so I'm happy to say they survived having the excellent taste to buy my tale

I hope you'll check out this new anthology, available from all major retailers here. "The Last of a Thing" was a fairly recent sale, so it does not appear in any of my collections nor is it currently available as an individual ebook. 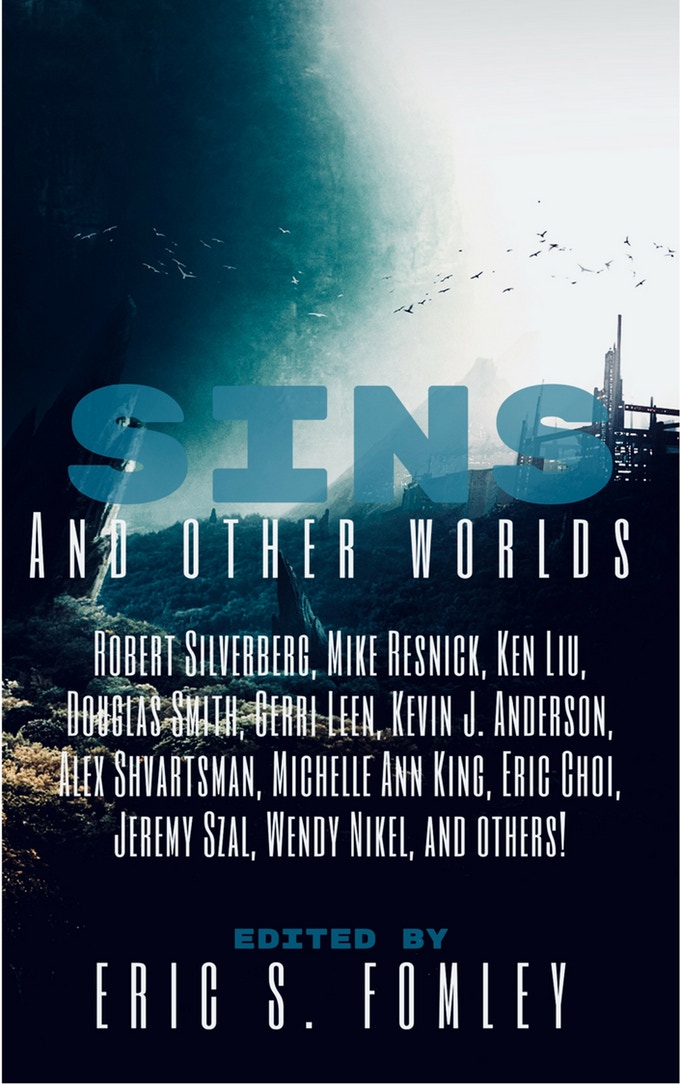 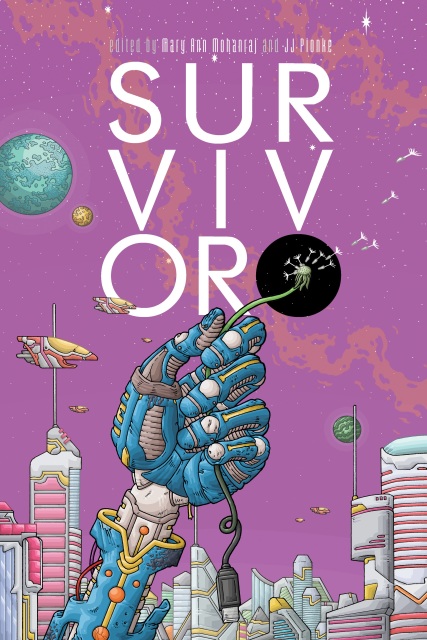 Interview and Chat on "The Panic Room" podcast

I was a guest on the genre writing podcast, The Panic Room, two weeks ago. The podcast episode is now up on YouTube here. My bit starts at about the 19:30 mark.

We chat about my writing, werewolf and shapeshifter movies, my shapeshifter novel The Wolf at the End of the World, Steven King, and baseball, specifically the Blue Jays. I had fun, and if you get a chance, give it a listen. 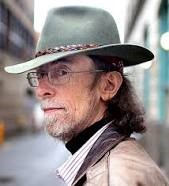 This is just too cool not to share. In the fall, I contributed free books to help with a GoFundMe campaign that Amazing Stories was running to help them relaunch as a paying fiction magazine.

I'd had one of my first big pro story sales to Amazing when I started writing ("State of Disorder"), and I wrote a column for them when they resurrected as a web presence a few years back. So I have a fond spot for Amazing and was only too happy to help out.

When the campaign ended, the new fiction editor, Ira Nayman, sent me the list of the people who had claimed my offered books, asking me to autograph and personalize the copies (which he kindly shipped to the winners). I was blown away to find that my collection, Impossibilia, had been claimed by none other than Spider Robinson.

I signed his copy and included a note saying I'd been a fan of his for years and was thrilled he'd selected one of my books. And there I thought it would end.

A few weeks later, I received an email from Spider, saying how much he was enjoying the stories. Nothing is better than hearing from readers but to get that feedback from a writer you admire is about as good as it gets. He was kind enough to provide the following, which I now proudly display on my website:

"The man is Sturgeon good. Zelazny good. I don’t give those up easy. I’m not certain the man is a Martian—I haven’t yet grokked the fullness—but his name is Smith."

And if I have to tell you who Sturgeon and Zelazny are, or explain the Martian and grok reference, you're probably on the wrong website.

"A Bird in the Hand" on StarShipSofa podcast 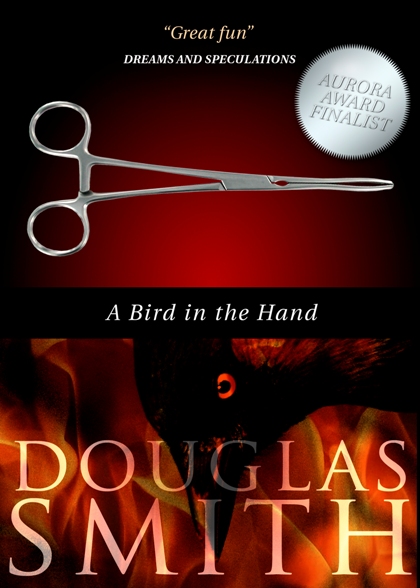 The podcast science fiction site, StarShipSofa, recently featured my shapeshifter story "A Bird in the Hand" on their monthly podcast of narrated short fiction. This is the second of my short stories in the Heroka universe, and the first to feature Lilith Hoyl as the protagonist. Lilith appears again in the short story, "Dream Flight."

In "A Bird in the Hand," Lilith awakes to find herself a prisoner in a top-secret government laboratory. To win her freedom, all she needs to do is prove she’s human.

“A very interesting turnaround story, in which our expectations are upended at the last minute. ...a good read, and sadly, far too relevant to our own present world.” —The Billion Light-Year Bookshelf

“...has a woman fed chemicals to prove whether she’s human or a shape-shifter ... well worth reading.” —SF Crowsnest Reviews

The story is narrated by Nikolle Doolin, and I am really thrilled with the excellent job Nikolle did on the reading. You can listen to it for free here.

If you like the story, it's included in my collection, Chimerascope, and is also available as a stand-alone ebook. 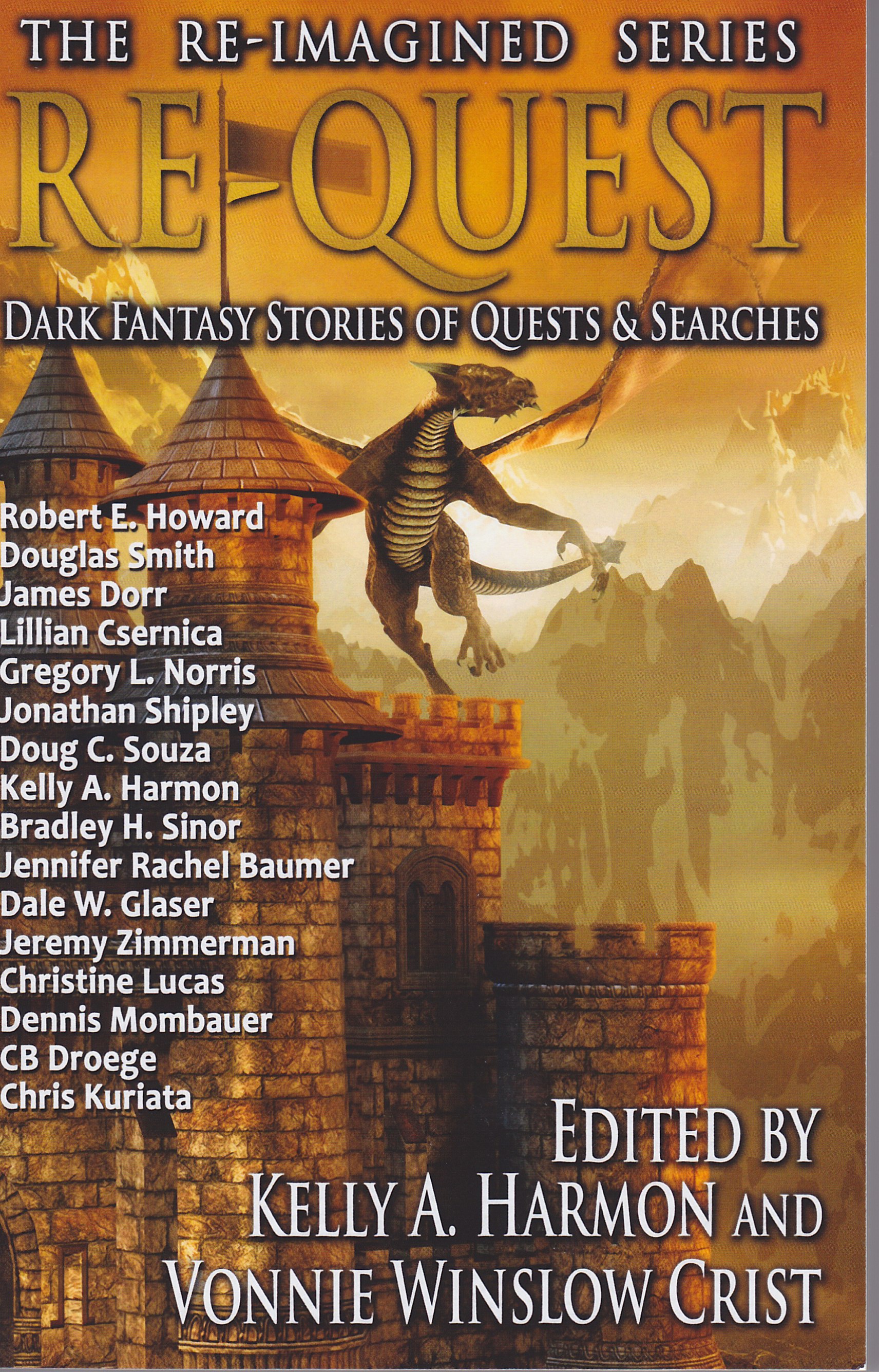 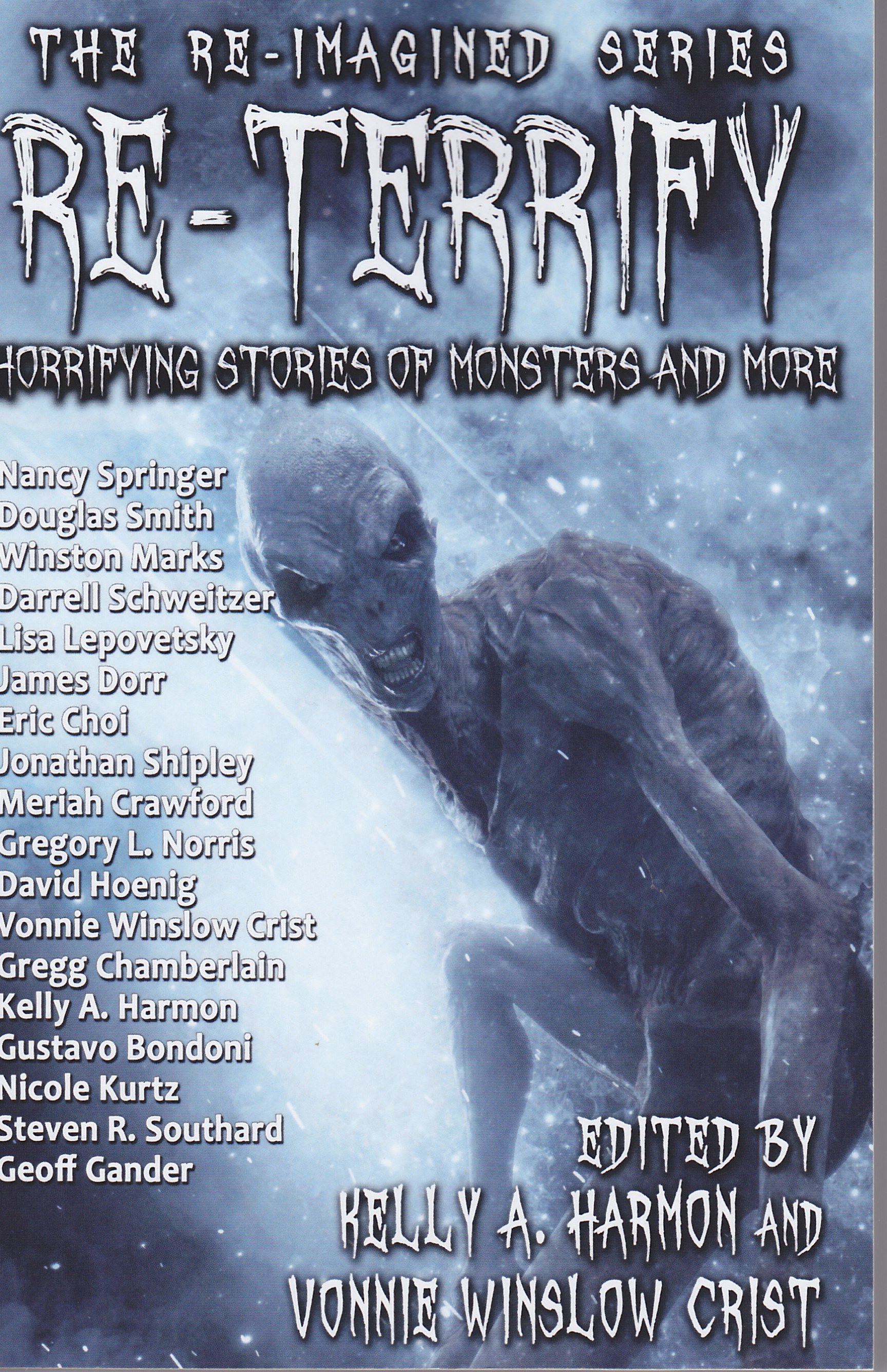 "Scream Angel" to be published in China

This will be the third time I've been published in China, and it's always a thrill to have my work available in such a huge market.

I'll be on the Panic Room Podcast on Jan 3