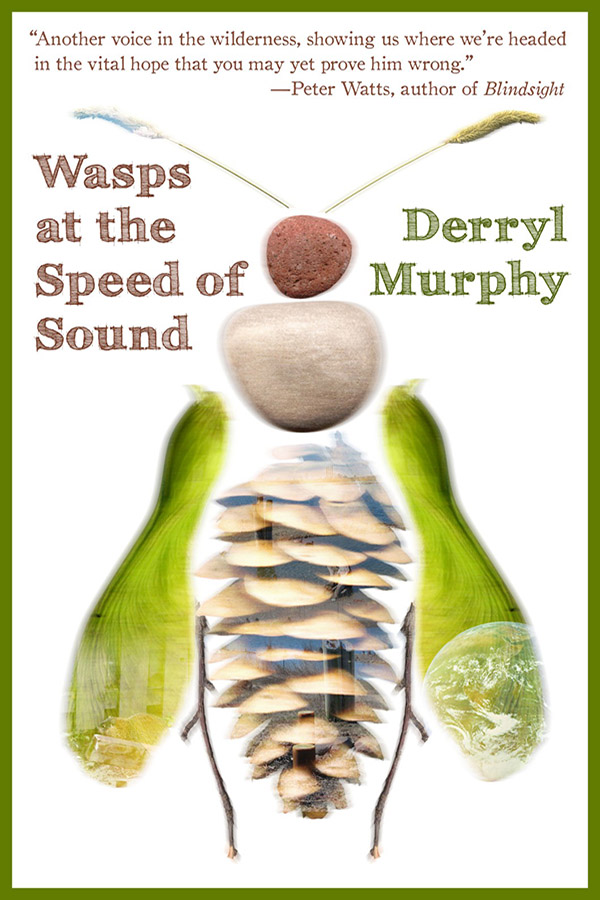 This is the final interview in my series on the authors included in the soon-to-be-gone *Exclusive* Dark Fantasy & SF Bundle I'm curating for StoryBundle.com. The bundle is the culmination of a nine-month project to help authors whose excellent books were orphaned by the sudden collapse of ChiZine Publications in 2019.

Plus you can direct a portion of your bundle purchase to Black Lives Matter (Canada). So here's your chance to help out a critical social cause and to help authors recover from this derailment.

Today's interview is with Derryl Murphy. I've known Derryl since shortly after I started writing in the late 90's, and am proud to call this talented writer a friend. Derryl has two titles in the bundle. Both are collections of short stories that showcase the breadth of his writing talent: Wasps at the Speed of Sound and Over the Darkened Landscape.

The stories in Wasps at the Speed of Sound are, in this era of human-driven climate change, even more relevant today than when first written. They show us, to quote Peter Watts in the introduction, "eleven ways for the planet to die." I read the title story of this powerful collection almost two decades ago when Derryl and I each had tales in the now defunct magazine Oceans of the Mind. Two decades—and I still remember that story. That is the kind of writer he is. Here's your chance to read these wonderfully crafted and thought-provoking tales.

The stories in Over the Darkened Landscape, which include an award nominee, span Derryl's short fiction career, from fantasy to science fiction, all written in his tight clean prose. This collection also collects for the first time all four of his "Magic Canada" stories, which look at key events in Canada's past through a fantastical lens.

Derryl: I have a solid lack of faith in humanity, which is certainly more prevalent in the ecoSF of Wasps at the Speed of Sound. As of late, though, I've noticed I tend to lean hard into ghosts, spirits, resurrection and body change, even in my science fiction. I think of the story "Summer's Humans" in Wasps, or "Ancients of the Earth" in Over the Darkened Landscape, and how they, along with others, explore how our nature can shift and how those changes can, in some cases literally, haunt us.

Doug: If you could tell your younger writing self anything, what would it be?

Derryl: It won't get easier. Keep those sights low and sensible.

Derryl: It adjusts depending on the needs of my family, my job, and my personal mental health. I long ago realized that, unless lightning struck, I wasn't going to be a full-time author, and I made peace with that.

Derryl: Being so engrossed in a book at age 8 that, when I went to pee after wiggling around for ages trying to put it off, I instead found my way to the kitchen garbage and relieved myself there, only realizing what was happening when it was too late. Happily, Mom thought this was hilarious. Also, happily, I was a boy and therefore, this was an easier mistake to follow through on.

Doug: As a writer, what would you choose as your mascot/avatar/spirit animal, and why?

Derryl: Well, I'm a dog person, and while at first that seems the easy answer, it takes a bit of thinking to agree that it's the right one. Indeed, probably I should narrow it down and say a beagle or any other dog that lets its nose get the better of it. Research can be a (figurative) bear for me, sniffing out one thing and suddenly chasing off after another. But I enjoy these trips, even if they lead me places where the research will not give up what I want or need for the story.

Doug: What's the most difficult thing for you about writing characters from the opposite sex?

Derryl: Avoid the male gaze. I've lived long enough with a wonderful woman to know much about her approach to the world (and I am old enough to know her approach is not part of a generic female take on things), but the 57-year-old me has to remember to NOT take lessons from older books I've read, life "lessons" that set in place when I was much younger, and think of my female characters as objects for men, either within the story or for those reading it. It's something I take very seriously these days.

Doug: If you couldn't write, what form of creativity would you pursue?

Derryl: Photography, which is already something I do. I was a photography student in post-secondary school, I worked as a newspaper shooter and was represented by a stock agency, as well as doing some commercial and personal work way back in the day. I've downgraded and downsized over the years, partly due to moving on, partly due to arthritic fingers, but am in the process of doing some minor upgrades again. Now and again, I share some photos on social media (aside from Facebook, which I sometimes swamp with shots), but mostly these days, I do it just for me and mine.

Doug: What is your favorite childhood book and why?

Derryl: Anything by Thornton W. Burgess, who wrote the Old Mother West Wind series of stories. I have warm feelings of reading those books as a young boy, so much so that my reaction on hearing my mother had tossed them inspired her to find more in a church rummage sale and buy them for me, and today they are here with me and will not be leaving again. Indeed, I wrote a story based in finding those books again, and seeing the name of a young boy inscribed in a couple of them and wondering what might have happened to that boy. Initially, I had thoughts of it being more mundane fiction, or perhaps even an essay, but my wife quickly disabused me of that notion, and now you can find "The Day Michael Visited Happy Lake" in Over the Darkened Landscape.

Doug: Why is the unconscious mind a writer's best friend?

Derryl: It's only a friend if you keep something handy to take notes when it springs a surprise on you. And if you have a partner who's patient enough to have the light come on in the middle of the night, or for you to slip on a housecoat and head downstairs well after the witching hour. Because if you don't have any of that, then it's a trickster who will offer up the world's most frustrating game of Telephone.

Derryl: Because of my "Magic Canada" stories, I'm going to go with a musician. If they don't have to be alive, it would be Stan Rogers, hands down, but if death makes this a no-deal than either James Keelaghan or my old friend Maria Dunn. All three have taken moments of Canadian (and other) history and turned them into wonderful works. In fact, Keelaghan's "Captain Torres" was the initial inspiration for my story - not a "Magic Canada" one - "Last Call."

Doug: If you could spend time with a character from your book, which one would it be and how would you spend the time? (PG-13, please)

Derryl: Easily the animal characters from "The Day Michael Visited Happy Lake." As much as tragedy, loss, and the act of being forgotten has struck them hard, they still hang on, and are willing to sacrifice themselves for the good of them all. Clearly just hanging out in their magical woods would be a great old time.

Derryl: The husband/father in "Summer's Humans" from Wasps at the Speed of Sound. Even early on the guy's a bit of a dick, blind to how things are with his wife.

Doug: What has been the best compliment you've ever received as an author?

Derryl: Easiest question I've been asked. "Northwest Passage," originally published in Realms of Fantasy, got me some fan mail, but as it was a ghost story based on true events that happened to my grandfather when he was a young man, the fact he was still alive when it was published meant a lot to me. More so that he read it, and liked it, although oddly enough the statement that sticks with me the most, delights me the most, was when he said "We didn't have no damned canned peaches when I was up there" with a smile on his face.

Derryl: "You shouldn't swear so much in your stories," said to me by a little old lady - literally - who knitted and smiled and nodded all the way through a reading I did at a convention.

Readers, you can pick up Wasps at the Speed of Sound and Over the Darkened Landscape, along with nine other excellent titles, by getting the *Exclusive* Dark Fantasy & SF Bundle from StoryBundle.com before it disappears this week at midnight (EDT) on September 10.