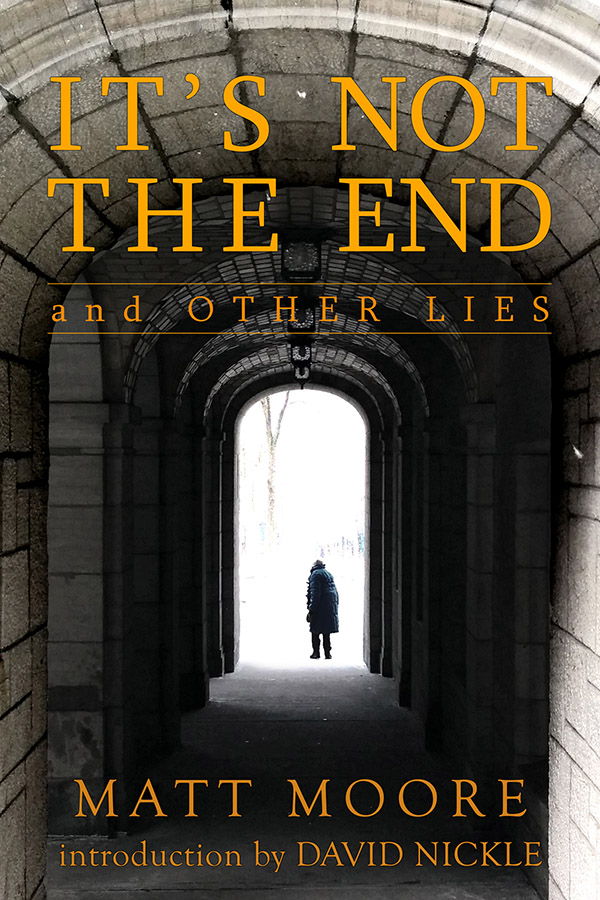 I continue my interview series with the authors in the new *Exclusive* Dark Fantasy & SF Bundle I'm curating for StoryBundle.com, an excellent selection of titles by bestselling authors and rising stars, and the culmination of a nine-month project to help authors with books orphaned by the sudden collapse of ChiZine Publications in 2019.

Today I talk with Ottawa-based writer, Matt Moore, whose excellent collection, It's Not the End and Other Lies, appears in the bundle

Matt: A recurring theme is what I call "personal apocalypses." It’s not that the entire world is ending, just yours—your marriage, your sobriety, your values system, your very identity.

In "Brief Candles," a young couple living in a time of turmoil and social change are forbidden from having children by the tenets of their faith, and come to question their own belief in how a religion meant to accomplish good can be so cruel.

"The Weak Son" has a young man trying to solve the mystery of his own death, but only able to access others’ memories, as his own are gone. A famed monster hunter in "Of the Endangered" comes to realize the town he is protecting may be more dangerous than the monster he is chasing, and the forces he secretly serves may be the biggest threat of all.

Matt: In a high school creative writing class, I wrote a one-act play. I had never written one before nor since, but my creative writing teacher (to whom my book is dedicated) urged me to submit it to the school’s drama department as one of four student-written plays to be performed at a festival.

It was selected. The two plays before mine were romantic comedies about how hard love can be for teenagers. My play was about a haunted typewriter slowly killing a teenaged aspiring writer. Sitting in the audience that first night, watching the performance, I sensed a growing unease in the audience as they had been expecting more of the same and got something different.

But the power of the experience was at the very end, which is a cliffhanger confrontation that ends with the stage lights going out. There was a good three seconds of silence in that darkness. No applause, no shifting feet, no one coughing. Three seconds of What-the-f**k-was-that? silence. And I remember thinking "I got ya."

Matt: In "While Gabriel Slept," the narrator learns the child he thought was his is the result of his wife’s infidelity. He imagines revenge as smothering someone, but whether it’s his wife or the child is unclear as is if he’s thinking about doing it or he actually does—both in the prose and to me as the writer.

It’s a scene I actually regret writing, but had some feedback praising it for pushing taboos when it was first published, so decided to not remove it from its appearance in It’s Not The End and Other Lies.

Matt: Editing, which is when I discover what the story is really about. I’ve had people say my writing it "tight", "taut" and "clean." I’d say it’s overly complicated with way too many moving parts, so I need to remove anything that is not one of those moving parts, but also ensure I have all the gears and pulleys and belts that remain properly calibrated for the story to turn. Sometimes it takes 15 or 20 drafts.

Matt: Hooper from "But It’s Not The End". In the story, the zombie apocalypse ended when the zombies stopped their violent attacks and began to speak, claiming they were the same people as before they died and demanding to be allowed to live their lives. Hooper, a cop who fought back the zombie horde, doesn’t trust them.

While I sympathize with Hooper as he is a victim of PTSD and has to endure a bureaucracy that has little understanding of on-the-ground reality, he was a cruel bully before the dead rose, and remains so.

Matt: Following a panel discussion at a convention, someone asked if I was the author of "Touch The Sky, They Say," which is the final story in this collection. I said I was, and this person said "Thank you for that story. I read it at a time in my life when I needed to read it, and it saved me" (or words to that effect). If I win numerous prizes and regularly appear on best seller lists, nothing will be more meaningful as an author than that.

Thanks, Matt! You can pick up It's Not the End and Other Lies along with ten other excellent titles by getting the *Exclusive* Dark Fantasy & SF Bundle from StoryBundle.com before it disappears on September 9.