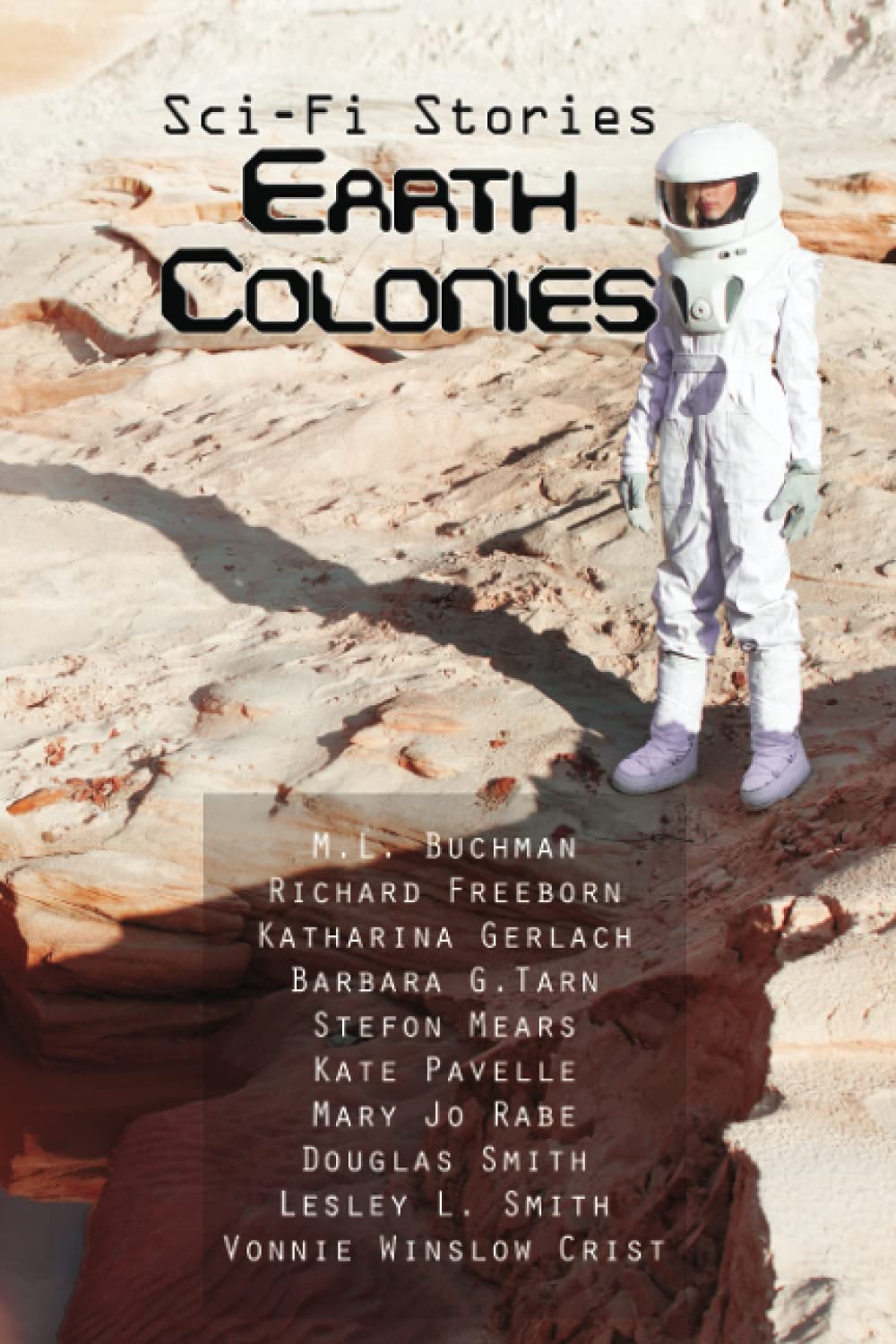 Catching up on some short story sales I hadn't posted yet. My first contact story, "Symphony," appeared in the anthology, Earth Colonies, last summer.

"Symphony" took second place in the contest and was also a finalist for the Aurora Award for best short fiction the following year.

Just before this anthology came out, coincidentally, I was interviewed via Zoom by Taipei-based writer, Todd Sullivan, about plot development, specifically in "Symphony," and in my writing in general. The interview is on YouTube here, as part of Todd's "Plotting in Fiction" series.

In his series, Todd uses voice-only interviews then adds supporting visuals. I think he did an amazing job with his selection of images for this one. I read the opening few paragraphs to start the interview. If you're interested, you buy an ebook edition of "Symphony" from my online bookstore or any of your favourite retailers here. 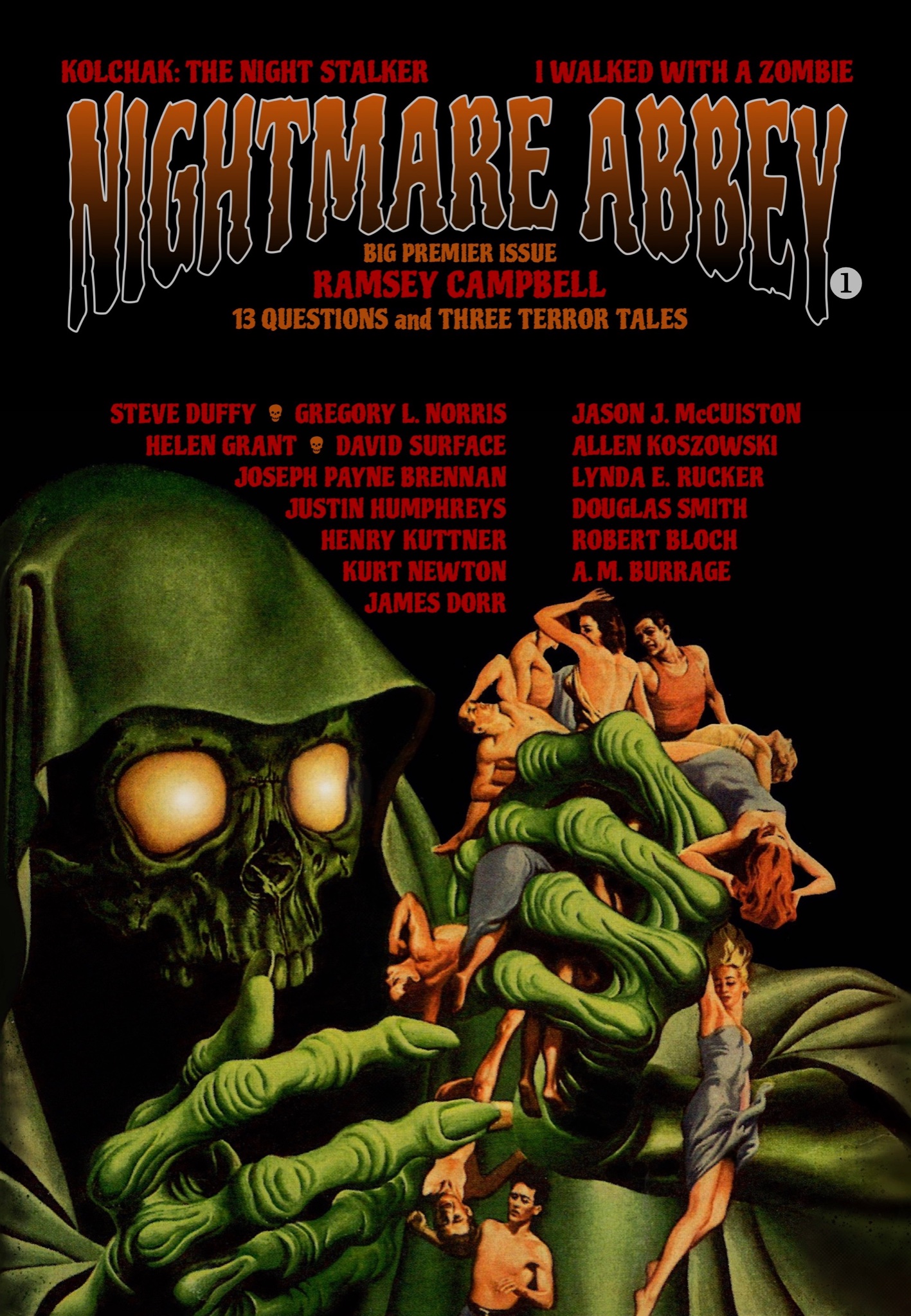 I've been in several issues of Tom's Black Infinity anthology series, so being in the inaugural issue of a new series was a treat. But the biggest thrill was getting to share the very cool retro cover (right) with the likes of Ramsey Campbell, Robert Bloch, and Henry Kuttner.

Although "Fiddleheads" is a horror story and has a supernatural streak running through it, unlike most of my dark stories, in this tale, the real monster is human.

But Andy is going to change all of that. He has a plan to find his brother—a deeply disturbing one.

"… every parent’s worst nightmare. This was a gripping tale and goes to show that not only parents suffer when a child goes missing and how it can warp a child." — Bitten By Books

Win a free signed copy of my upcoming novel

Here is something you can do that will help me a LOT with the upcoming release of The Dream Rider Saga trilogy. It will take just a minute of your time and has some cool benefits for you as an avid reader.

BookBub charges nothing to join and is massively popular with avid readers. As a member, you'll receive regular mailings announcing giveaways and great deals on books in your favourite genres, plus early notice when your favourite authors release new books (such as my upcoming Dream Rider titles, wink, wink).

But it also helps authors. The more followers an author has, the more tools BookBub provides for the author to reach new readers.

So if you can, please (please please) click the button above (or go here), and then click the "+Follow" button beside my name on my BookBub profile.

I posted earlier about The Dream Rider Saga, a new urban fantasy trilogy I'll be releasing starting later this year.

The Lost Expedition, book 3 and the conclusion to the trilogy, has gone out to my wonderful beta readers and will soon go to my editor for a story level review, sometimes called a substantive edit. After I incorporate that feedback, the book goes to my line editor in early May.

The titles in the trilogy again are The Hollow Boys, The Crystal Key, and The Lost Expedition.

I decided early on (based on excellent advice from Charles de Lint) to write all three books before releasing any of them. The downside, of course, has been that I've not published any new fiction, besides short stories, for some time.

But the upside is that these books will come out quickly, with maybe 3-6 months between each title. I'm working through the release plan, but I'm aiming to have book 1, The Hollow Boys, released somewhere Oct-Dec 2022, with The Crystal Key and The Lost Expedition both released in 2023. Once the books are up on retailer sites, I'll post where you can preorder the titles here.

Thank you for your patience as I worked on writing all three books before you got to see any of them. More info to come, including the description for Book 1, The Hollow Boys.

Hey all! I have a new urban fantasy trilogy coming out starting in 2022. Yes, an entire trilogy. All written and soon to be available for your reading pleasure.

It's called THE DREAM RIDER SAGA, and the books are THE HOLLOW BOYS, THE CRYSTAL KEY, and THE LOST EXPEDITION. I expect book 1 to be available late fall, with books 2 and 3 coming out in 2023. More info to come, including book descriptions and cover reveals, but right now...

...I need your help! I need you to follow me on BookBub:

BookBub is free to join and is massively popular with readers. As a member, you'll get personalized recommendations for great deals on books (including free ones) handpicked to meet your tastes and favourite genres. You'll also get early notice of when the books become available on pre-order, including my upcoming DREAM RIDER books.

But it also helps authors, as the more followers an author has, the more tools BookBub provides to reach potential fans.

And stay tuned for more info on the books!

I'm giving a series of workshops (Feb 3, 10, 17) for the New England chapter of Sisters in Crime on selling short fiction and using it to build your writing career. Member free, non-members $25. 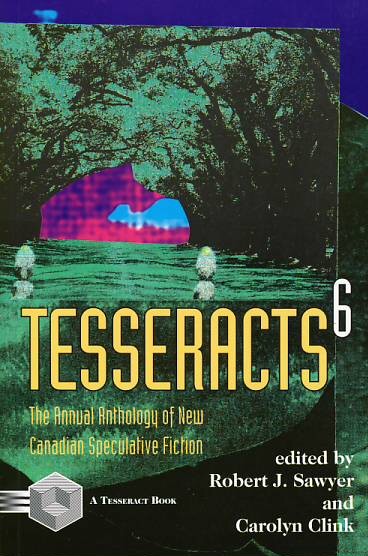 Exactly twenty-five years ago tonight, on New Year's Eve, 1996, I received a letter in the mail (yeah, snail mail back then) that I still remember fondly.

The letter was from the (even then) multi-award-winning Canadian SF writer, Robert J. Sawyer, and his award-winning poet wife, Carolyn Clink. Rob and Carolyn were guest editors of the next instalment in the annual speculative fiction Tesseracts anthology series, which would be Tesseracts6. And the letter was their acceptance of my story, "Spirit Dance," into the anthology.

It was my first sale. What a way to end a year and start a new one.

Twenty-five years ago. A quarter of a century. Yikes.

I've sold over two hundred stories since then and seen them published in twenty-seven countries and thirty-five languages. I've published three collections (Chimerascope, Impossibilia, and the translated La Danse des Esprits), a novel (The Wolf at the End of the World, which is a sequel to "Spirit Dance"), a writer's guide (Playing the Short Game: How to Market and Sell Short Fiction).

And I am currently finishing the last chapter in the final book on a new urban fantasy trilogy, The Dream Rider Saga, the first book of which, The Hollow Boys, will be released in 2022. 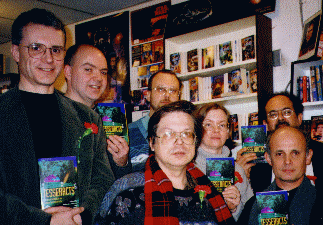 But it started with that first sale. "Spirit Dance" was also the first story I'd ever written (well, as an adult), so that made the acceptance even more special. And it led to my first award, when a French translation of the story won the Aurora Award after its appearance in the Quebec magazine, Solaris.

So thanks, Rob and Carolyn, for accepting the story and making that New Year's Eve one of my best ever.

And if the quarter of a century that's passed doesn't make us feel old, this picture from the launch should do the trick. Left-to-right: me, Scott MacKay, Rob, Ed Baranosky, Carolyn, Andrew Weiner, Peter Bloch-Hansen.

Have Ship, Will Travel anthology sale 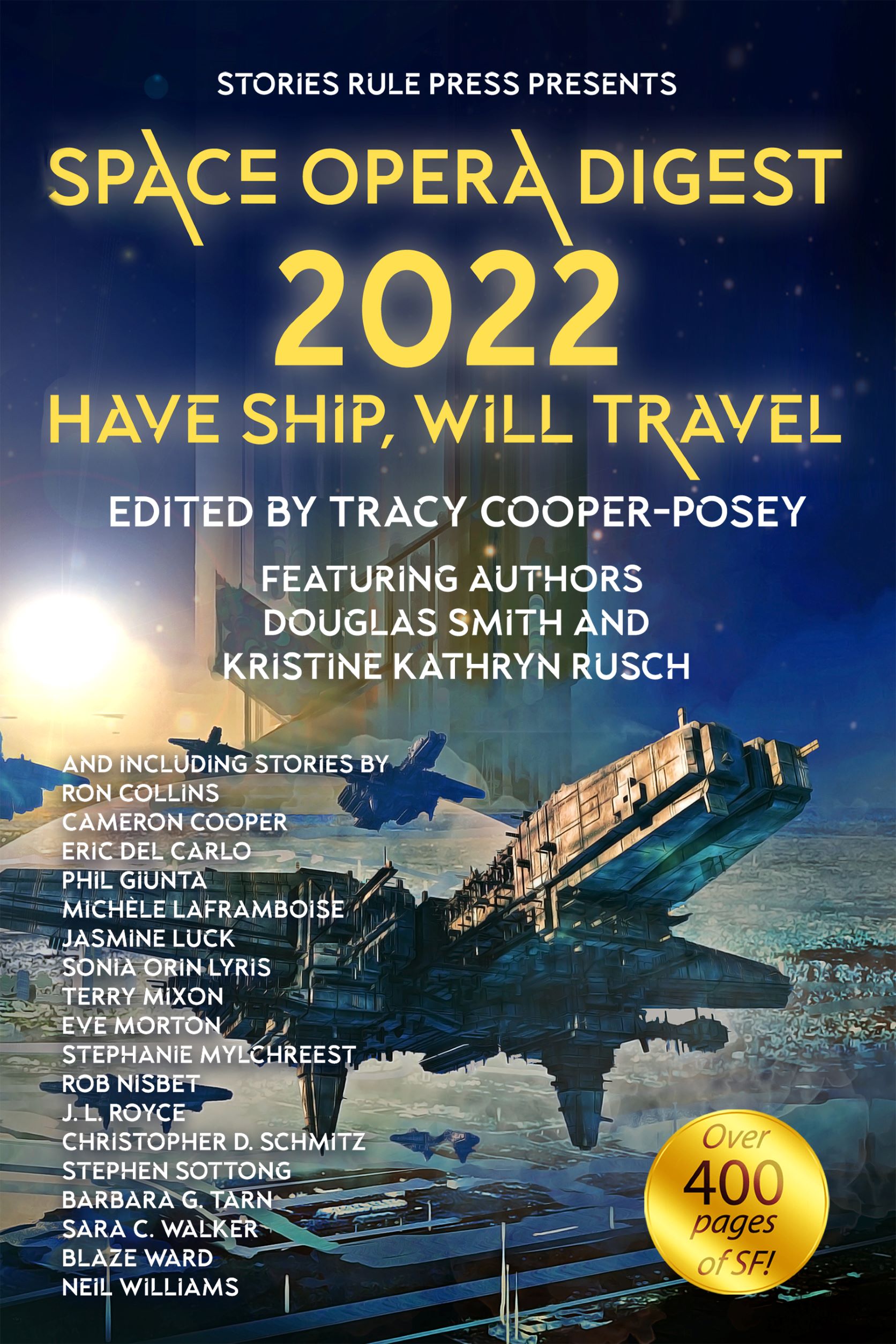 My SF first-contact story, "Symphony," will be appearing in the upcoming space opera anthology, Have Ship, Will Travel, coming out in January from Stories Rule Press in Canada. It's a reprint, but I got a special kick out of this one.

If you're one of my newsletter subscribers, you would've received "Symphony" as your monthly ebook story back in March of this year. If you're not on my list, you can subscribe here (and get a free ebook for signing up).

And if you want to check out the excellent bunch of stories in this very large antho (over 400 pages), you can pre-order it here from your favourite retailer (note: an Amazon link will be added soon).

So what was that special kick I got? Check out the cover on the right. I'm one of the two "featured authors" at the top along with the multi-award-winning author and editor, Kristine Katherine Rusch. I've attended ever so many craft workshops given by Kris. This is my first (and likely last time) being billed ahead of her. Kris's story opens the antho and mine closes it. Very cool.

I'll be giving a series of three workshops in early 2022 via Zoom covering my writer's guide, Playing the Short Game: How to Market & Sell Short Fiction. The workshops are free and sponsored by the Richmond Hill Public Library of York Region and will be offered the first Thursday evening of March, April, and May (Mar 3, Apr 7, and May 5) from 7:30-9:00pm.

If you're interested, go here to register ahead of time. Note that you'll be registering for all the Jan-Mar workshops offered by the library. They're all free, and you don't need to attend any other workshop (but you're welcome to).

Registration links for workshops #2 and #3 are not yet available, but I'll post here when they are. I look forward to seeing you there. 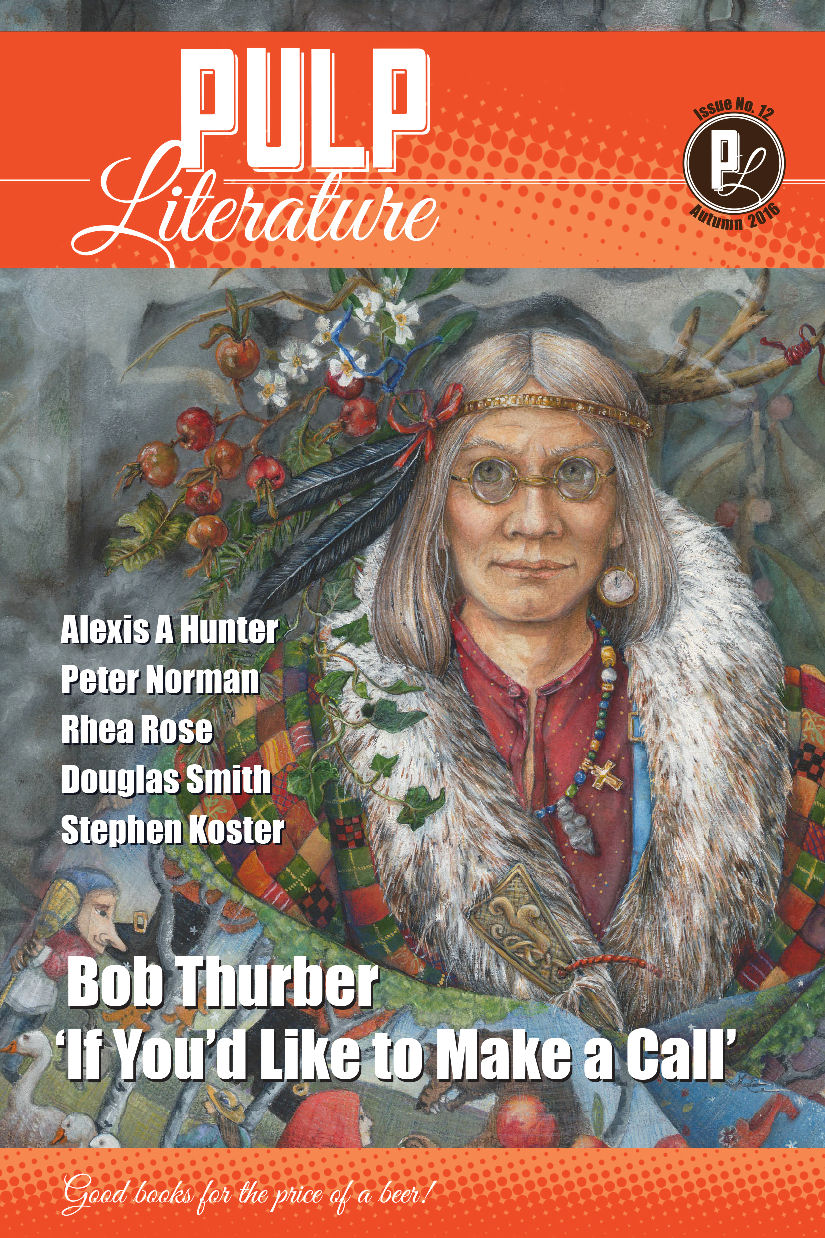 I posted earlier about recently selling a brand new short story that I'd written at the start of the pandemic. Well, I sold another "new" story in November, but it's one that I wrote much earlier than 2020. As in much, much earlier.

This sale is a first for me in a couple of ways. One, it's not a genre story. "The Balance" is mainstream. It's also not a "new" story.

I wrote this one almost two decades ago, in 2002. It's a very personal story, inspired by events surrounding the birth of our second son and the time he spent in hospital having far too many operations in his first few weeks of life.

Although I kept submitting it to markets all those years, I'd come to believe it was too personal to ever sell. So I was extremely happy when the excellent Canadian multi-genre magazine, Pulp Literature, accepted it. This will be my second appearance in PL. The cover from my earlier appearance is pictured

I'll post here when the issue with "The Balance" is published and available.