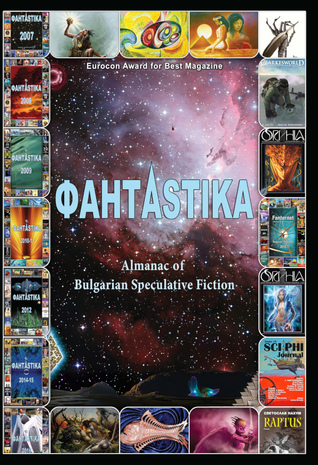 This post is on behalf of a Bulgarian writer / translator / editor friend, Kalin Nenov. I first met Kalin in 2011 when he reached out to me on behalf of The Human Library Foundation, a Bulgarian small press, with an interest to publish my Aurora Award-winning novelette, "Scream Angel" in their FantAstika 2010-2011 Almanac.

FantAstika is an annual 400-page publication defined by its creators as "a territory of humaneness, for the same reason that we have named our foundation The Human Library. We believe that SF is the tool best suited to reflect the ever-changing humane aspect: to winnow the transient from the eternal in Homo Sapiens. Therefore, we publish speculative fiction of all kinds and by all peoples, as long as it is looking for humaneness."

The Human Library is a community of Bulgarian writers, translators and artists. Since 2005, one of their main activities has been translating Bulgarian speculative fiction into other languages and promoting it around the world. Recently, they compiled an anthology with the best short stories and excerpts from longer works. Most of the stories have already been published in professional magazines, such as Oceans of the Mind, Unstuck, and Future Science Fiction Digest. Here's more info on the antho, including the table of contents.

Now the members of the Human Library are looking for a publisher or an agent who will be interested in representing the anthology. If you can point them to any—or can recommend any promoters of international SF they should get in touch with—drop them a line at poslednorog [at] gmail [dot] com.

And if you'd like to read the manuscript of the anthology, they'll be happy to share it with you. As Kalin says, "In such times, we need bridges across the world—and to the future—more than ever."