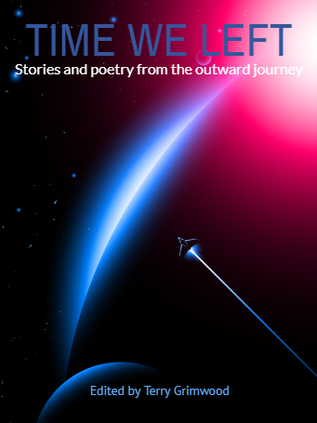 My SF story, "Symphony," appears in the new anthology, Time We Left, from The EXAGGERATED Press and edited by Terry Grimwood, a collection of stories about humanity leaving Earth and venturing into space.

"Symphony" was a finalist for the Aurora award and first appeared in the Canadian literary magazine, Prairie Fire, in 1999. In it, the colony ship, The Last Chance, has fled a plague-poisoned Earth with the remnants of the human race. Yes, even over twenty years ago, I was warning about pandemics ;-)

Launched before completion of its biosphere, the ship is only partly self-sustaining. Humanity has to find a new home—and time is running out. It isn’t called The Last Chance for nothing.

When they find the planet, it seems a dream come true. Earth-like, a breathable atmosphere, unpopulated. They name it Aurora, for the beauty that dances in its skies. At least, it had seemed beautiful at the time. Now they aren’t so sure. Now people are dying.

Gar Franck is the ship’s communication expert. When signs point to a non-human intelligence on the planet, Gar becomes the key to communicating with it.

But how can he communicate with an alien being when he can’t even talk to his autistic son, Anton, or his increasingly distant wife, Clara?

"There are two stories in "Symphony"...both converge in a spectacular, explosive finale. Smith's prose is poetic and evocative. He creates an intricate fabric of light, color, and sound with effortless flair. The story’s fluid style and the abundance of complex, wrenching emotions [make this] another recommended story." —Eugie Foster and Marsha Sisolak, Tangent Online

"A strong SF-nal story about a 'sentient light symphony' that objects to humans colonizing 'its planet.' How would you communicate with such and how would it react to a baby who lacks all 'human baggage' are some of the issues addressed here. (A+)" —Fantasy Book Critic

Time We Left is available in hardcover here, and an ebook edition will be released soon. "Symphony" is available also as a standalone ebook, and also appeared in my collection, Chimerascope. Both are available in my online store or from your favourite retailer.